Birds of prey, or raptors, are birds that hunt other animals for food and are specially adapted to do so. Birds of prey include eagles, condors, kites, falcons, hawks, osprey, owls, vultures, buzzards and secretary birds.

When hunting, birds of prey use their highly adapted feet and talons to capture and kill prey. Hawks and owls will grab prey from the ground and then kill it by crushing it in their feet. Falcons use speed to effectively kill prey by plummeting down from high up and striking with their feet. Peregrine falcons reach speeds of up to 90 mph/145kph

Birds of prey are carnivorous and gain certain nutrients from the stomach contents of their prey. The entire prey animal is devoured by the bird of prey and later pellets of undigested matter are regurgitated. Falcons have a nook (notch) on their upper bill to break the neck of prey. Vultures have especially large, strong beaks to rip through hiding and break bones.

Birds of prey have a highly developed sense of sight, far better than our own, and females are larger than the males (except for vultures and secretary birds) as they need to defend their nestlings.

The heaviest bird of prey is the Andean condor, it weighs in at 27 pounds (12 kg) which is a lot to carry in flight. The largest, however, are the eagles and vultures with wingspans of about 10 feet (3m). The most powerful bird of prey is the Harpy Eagle. The Harpy Eagle’s wingspan is 6.5 feet (2m) and their talons can be as long as 5 inches (12.5cm).

To truly experience birds of prey why not visit a local rehabilitation center and view them up close. Many places offer falconry demonstrations where you can see these wonderful birds in action. If you are interested in finding out what birds of prey are in your area consult a region specific field guide.

Any opportunity to see birds of prey in action will be an awe-inspiring and unforgettable experience. 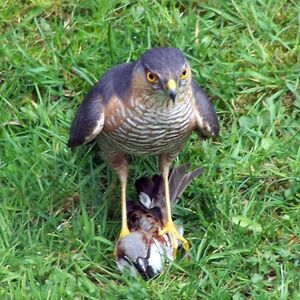 The ducks paddling around as well as scooping up breadcrumbs are harmless enough, yet not all birds are so accommodating. Meat-eating birds– usually called raptors– make up a huge part of all bird varieties. Eagles, hawks, falcons and others are energetic seekers, consuming everything from fish to rodents, to carrion, to various other birds.

Carnivorous Birds A bird of target, or raptor, is a bird that pursues its food utilizing its curved beak and talons. They likewise generally have sex-related dimorphism as well as outstanding vision. Nocturnal predators (the owls) are separate from the diurnal family members, and also remain in the order Strigiformes. Although the term “raptor” is sometimes utilized a lot more broadly, typically it consists of owls, as they as well are meat-eating birds, exploiting computer mice and also various other small animals.

Lots of terms are utilized to define specific types of birds of the target, both by professionals as well as laypeople, in means that vary a bargain. Eagles are large raptors with long, wide wings and massive legs. Booted eagles have feathered legs as well as build big stick nests. (Non-specialists often make use of the term extremely broadly, to suggest nearly any kind of raptor.) Kites are raptors with lengthy wings as well as weak legs which invest an excellent deal of time skyrocketing.

The Greatest Guide To Serina: A Natural History Of The World Of Birds – Carnivorous …

Falcons are tiny to tool sized predators with lengthy pointed wings. Unlike the majority of various other raptors, they belong to the Falconidae instead of the Accipitridae. Lots of are especially speedy flyers. Rather than building their own nests, falcons proper old nests of various other birds. Occasionally they lay their propel cliff walks or in tree hollows.

Most quest by moving as well as circling reduced over grasslands as well as marshes on their long, broad wings. Hawks are medium-sized birds of prey that belong to the category Accipiter. They are mostly woodland birds that search by abrupt dashboards from a hidden perch. They normally have long tails and high visual skills.

Other birds are opportunistic omnivores and also, although their diet regimen may contain meat when the dish occurs (as with roadkill), they are not technically taken into consideration purely meat-eating birds. All message is available under the regards to the GNU Free Documentation License.

Cape May Warbler Madeleine McDonald/Flickr. com (CC by 2. 0) Frugivorous birds, or frugivores, are fruit-eating experts. Orioles, waxwings, and also toucans are all frugivorous and also will certainly eat fruit, berries and fruit-flavored jelly in the backyard. Lots of other birds will also sample fruit, including yeast infections, complaints, quail, jays, wrens, tanagers as well as even some finches and also sparrows.

” Carnivorous” describes a diet plan that consists largely, though not always exclusively, of meat. Food or victim commonly includes animals, birds, bugs, amphibians, fish or reptiles, as well as it is gotten either with searching or scavenging. carnivorous birds./ car-NIH-vore-us/ Birds of prey such as hawks, falcons, eagles, osprey, marauders, and owls know meat-eating birds, however, lots of various other types of birds additionally take in a fair quantity of meat and can be identified as carnivores.

When a bird’s diet plan has a majority of one sort of food, however, it is proper to describe the bird by the particular kind of food it likes. bird of prey. Carrion is also a popular food source for meat-eating birds, specifically marauders, as well as might be a discarded hunting carcass or entrails, roadkill or any animal that might have died from an ailment, crash or injury.

Various predacious birds have various hunting strategies, such as: Soaring slowly as well as using their keen sight to seek victim, remaining much enough far from prospective sufferers up until all set to strike with a steep dive. Setting down silently as well as remaining still, awaiting appropriate victim to approach prior to going down onto the target from an elevation or attacking to capture a morsel.

Resting on one perch previously swiftly flying bent on catching a bite as well as right away returning to the same perch either to consume or to await the following bite. Expecting feeding activity by other meat-eating birds or any kind of feeding killer, after that stealing the target by chasing after away or subduing the competitors to benefit from the prepared meal.

By being adaptable as well as changing to different targets when essential, predators can maximize any kind of available food. Many yard birders dislike going to predators, yet drawing in backyard hawks is a terrific test of bird-friendly landscaping as well as can assist handle a large range of other yard wildlife, consisting of computer mice, reptiles, snakes, and snails.

For birders who choose not to supply a feathery banquet for air-borne predators, it is additionally simple to take steps to safeguard backyard birds from hawks as well as various other birds of the victim. Meat-Eating. Carnivorous.